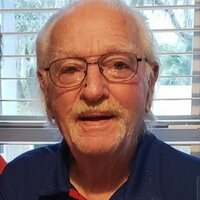 Paul Duane Heidenreich of Mulberry, Florida passed away Thursday, November 25, 2021. He was 93. A native of Table Grove, Illinois, born October 1, 1928, to Delbert and Blanche Geraldine Heidenreich, Paul and his wife moved here in 1987 from Rock Island, Illinois. He retired as a Clerk from the US Postal Service after 37 years; was a US Army veteran during the Korean War; was member of the VFW and American Legion. He was a lifelong baseball fan, playing catcher throughout his high school years and a diehard Cubs Fan, and was elated to watch the Cubs win the World Series in 2016! Paul was preceded in death by his wife of 47 years, Darlos Verlene Heidenreich, his sisters Elaine Knowles, Barb Heidenreich, and his brother Dean Heidenreich. He is survived by his daughters: Debra Jankowski (Buerl), Darlos Stroud, Denise Heidenreich, Paula Smith, stepdaughter Lana Vandegenachte; his brother Gordon Heidenreich, and his sisters Vera Beatty and Betty Knowles. Paul also leaves behind 7 grandchildren and 6 great-grandchildren. Visitation will be Wednesday, December 1, 2021, from 9 to 10AM at Oak Ridge Funeral Care in Winter Haven. Funeral services will follow at 10AM. Interment will be at Florida National Cemetery in Bushnell, Florida.