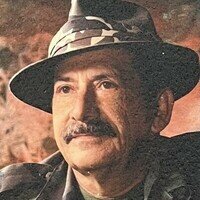 Charles (Chuck) Edwin Weeder was a longtime resident of Winter Haven since 1961. He died peacefully at home on February 4 at the age of 88. Chuck is survived by his wife Norma J. Weeder, and former wife Nancy M. Weeder of Winter Haven; children Tim (Bernie) Weeder of Carsonville, Michigan; Mark (Terri) Weeder of Murphy, North Carolina; David (Dori) Weeder of Farner, Tennessee; Kristen Mason of Winter Haven and Matt Weeder of Winter Haven; grandchildren Dustin Weeder, Danielle Weeder, Carson Weeder, Logan Thomas, Reagan Mason, Easton Mason, Jett Weeder, and Annalise Weeder; and great granddaughter Cameron Weeder. Chuck was born in Carsonville, Michigan on January 18, 1934, to David K. and Evelyn M. (nee Lambkin) Weeder. He grew up on the family farm, was educated in a one room school house and graduated in 1951 from Sandusky High School in Michigan. He attended Michigan State University and while a student there he enlisted in the Air Force for the Korean War. He returned to his studies after his service. He began his career in the the early days of the mobile home industry in 1959 when he took a job for manufactured housing pioneer Gurdon Wolfe, Sr. in Marlette, Michigan. Recognizing Chuck’s talents he was asked to manage a new factory in Lake City, Florida. He then worked for a number of years managing different factories in Auburndale, Bartow, and Corona, California. In 1973 he started his own company, Homes of Merit, in Bartow with the goal of creating an employee shared company producing a quality home. In 1985 he opened a second facility in Lake City. Homes of Merit became one of the top manufactured home builders in the southeastern United States. He retired in 2002. When he was a young boy he played guitar and sang cowboy songs at county fairs and radio stations as the “Singing Buckeroo”. He went on to become a trumpet player in high school. He later enjoyed golf, bowling, piloting his airplane, boating, hunting and fishing. He was an active member of Sertoma Club and the Winter Haven Chamber of Commerce for many years. He was an intelligent and determined man who dared to dream big, worked hard, lived modestly, and was generous to many people along his life’s path. He will be missed by his family and friends in so many ways. Appreciation is extended to Chuck’s dedicated caregivers from Home Instead Senior Care and Cornerstone Hospice Service. A funeral service is scheduled for Saturday, February 12th at 11:00 am, preceded by a public viewing at 10:00 am at Oak Ridge Funeral Care 2425 W Havendale Blvd. Winter Haven, FL. Interment will follow at Rolling Hills Cemetery 4816 Tilden Rd Winter Haven.