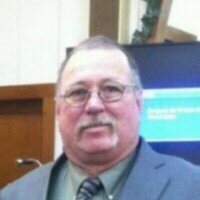 Bradley J. Burdick of Weatherford, Oklahoma passed away on February 18, 2022 at his son’s residence in Davenport, Florida, where he had been living for half a year. He was 68. Brad was born on October 5, 1953 in Hutchinson, Kansas to Robert Harold and Juanita Nale Burdick. He was a proud veteran of the United States Navy, serving in the Vietnam War. Brad worked for Western Oil Company for some 20 years before they were bought by BJ Hughes, where he finally retired, after another nearly 20 years. He was a member of the Kingdom Hall in Weatherford, Oklahoma and loved to play a game called Perfect World on his computer with his best friend Jerry. Brad also liked to go fast, whether on his Harley Davidson motorcycle or in his Prowler. He was predeceased by his wife, Debi Burdick; his parents, Robert and Juanita, as well as a stillborn baby, April Burdick, and brothers, Harold R. Burdick, Larry Burdick; brother-in-law, Donald Shaddox. Brad is survived by his daughter, Athena Burdick and her son, Zachary Burdick, both of Weatherford, Oklahoma and son, Jade Burdick and his wife, Missie of Davenport, Florida, as well as their children, Shailynn Spencer and her husband Garrett of Orlando, Florida and Matthew Burdick of Davenport, Florida. He is also survived by his siblings, Wayne A. Burdick and his wife, Cathy, Beverly E. Shaddox, Richard S. Burdick and his wife, Barbara, Eddie L. Burdick and his wife, Vickie. A celebration of life service will be held at a later date.