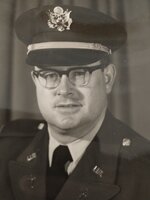 John C. Scott, 92, of Davenport, Florida passed away on May 2, 2022 surrounded by his loving family. He was born on June 29, 1929 in Providence, Rhode Island to Harry and Hellen Dott Scott. He was a proud veteran who served his country for 29 1/2 years in the Army as Chaplain. John moved to Florida in 1996 from Virginia, and after serving his country, he continued working as a Chaplain in the Chapel program in Polo Park for 26 years. He was a member of the Military Chaplain Association, a member of the V.F.W. and a member of the United Methodist Church in Davenport, FL.

He is preceded in death by his parents Harry and Helen; siblings, David R. Scott, Courtney Scott and Ellen Scott. John leaves behind to cherish his memory his loving wife, of 68 years, Barbara Scott; sons, Douglas P. Scott of NC and John A. Scott of Davenport, FL; daughter, Deborah H. Shank of RI; six grandchildren; and 10 great grandchildren. He will be truly missed by all.