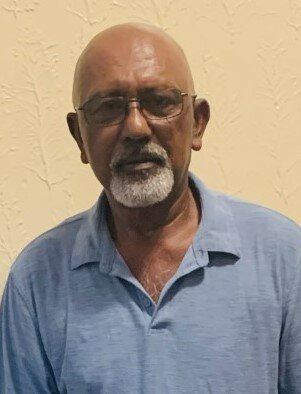 Gopaul Boodram was one of a kind. He was born on September 15th 1959 to Naipaul and Loveline He leave behind his wife, Lilene, 5 children Anita, Tommy, Sunita, Lalita and Jason.  He was the eldest  sibling of John, Chets, Monica, Mohani , Rohani, and Harry. He has 7 grand children, Annesa, Allisen, Ariana, Amelia, Jaslene, Joliana, and his only grandson, Ethan. Daughter in law Tatianna. He also leave behind many cousins to name a few Indra and Tony as well nieces and nephews Aniela, Sabrina, Nafeeza, James, Marilyn, Vishal and too many more to list. Gopaul was known to everyone as Pampuri. Gopaul was born in Miss Phoebe Guyana. He was known to many. He was kind hearted, gentle and loved his family wholeheartedly.

Growing up in Guyana he didn’t have much and struggled in life a lot. He loved attending school and was a math wiz. He was the human calculator in the family and could solve any math problems you threw at him. Gopaul was the glue to the family and was always there when needed. He was the father figure to many.  He worked his entire life to support his family and ensured they lack nothing. He retired in Dec of 2021 and moved to Florida with his wife to enjoy his retirement. But God had better plans for him.

On April 29th 2022, Gopaul was taken suddenly from our lives. He passed away peacefully surrounded by his loved ones. His life was meaningful and touched by so many. He showed his support in any way possible and gave the best life advice to his children and grandchildren. He was so proud of his accomplishments and wanted his family to have a home to visit and often welcomed everyone he spoke to. He will be missed tremendously. Dad, we hope that you are resting in paradise enjoying the real retirement God has in store you. We love you. God bless.

To send flowers to the family or plant a tree in memory of Gopaul Boodram, please visit Tribute Store
Monday
2
May

Share Your Memory of
Gopaul
Upload Your Memory View All Memories
Be the first to upload a memory!
Share A Memory
Send Flowers