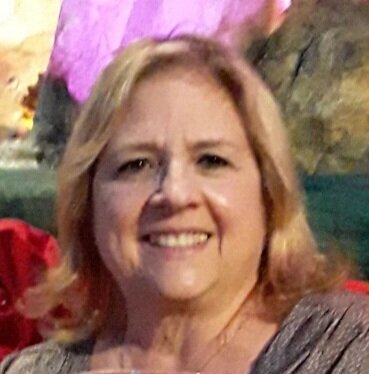 In the late 1990’s she had a career move and became a teacher’s aide up until she moved to Florida in 2017.  She worked at Epiphany Elementary School, in Cliffside Park, New Jersey, St. Bridget/Resurrection Abbott School, as well as St. Nicholas School both in Jersey City, New Jersey. She loved to draw and work with children. During her time as a teacher’s aide, she began an arts and crafts program, which; as of today, is still an active program at the school. She also worked for many years at the summer camp program for the town of West New York, New Jersey. When she moved to Florida she semi-retired and worked part time at Walmart.

Since moving to Florida her and her husband, Joe, enjoyed their time together by seeing new attractions. As annual members; they would go to Bok Towers, where she would read or draw landscape pictures. They were both avid country music lovers and would attend various concerts together. She loved relaxing at the pool with her husband and friends sipping on drinks and having a good time. She was involved with planning and attended numerous Edge Hill Community clubhouse events. On her downtime she developed a passion of gardening especially for succulents.

She was known by many for her caring and comedic personality. Friends would say that she was always welcoming and made them feel like they were part of her family. Family was most important to her especially her two daughters; Kristin and Ashley, and her willingness to do anything for them.

To send flowers to the family or plant a tree in memory of Lou Ann Benjamin, please visit Tribute Store
Thursday
16
June