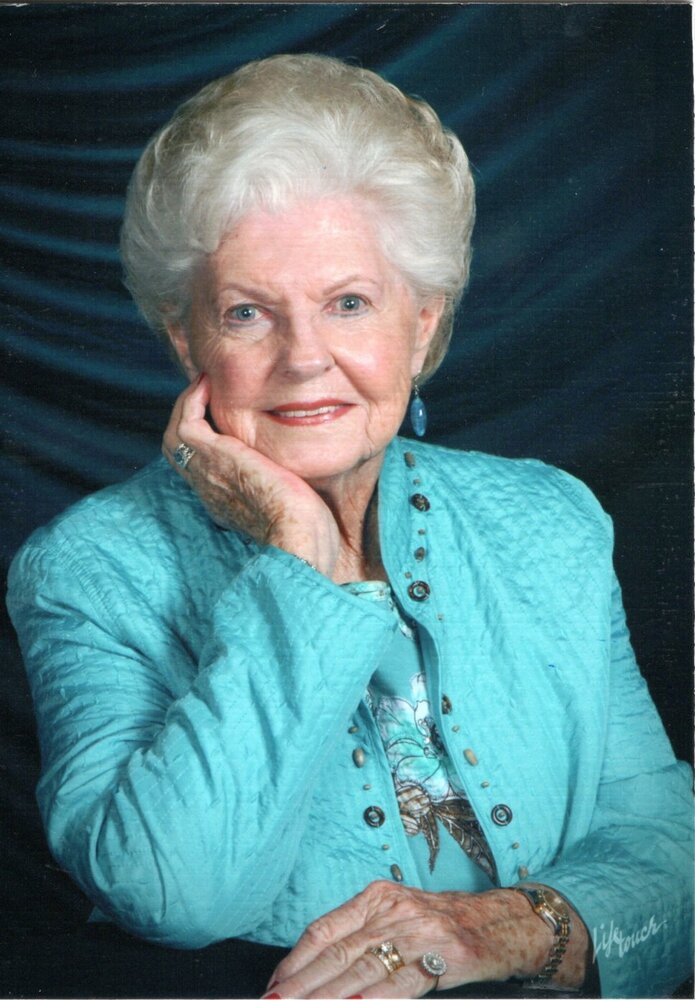 Eugenia Tucker passed away from complications of Alzheimer’s on Tuesday, September 20, 2022 at Good Shepherd Hospice in Auburndale, Florida.

She attended Elementary School in Rome, Junior High in Atlanta, and High school in Macon, Georgia. Her post high school education was at the Business Training Institute of Macon.

It was on a blind date when Mrs. Tucker met the love of her life, James R. “Doc” Tucker. Fourteen months later, they married on December 21, 1949. Mr. and Mrs. Tucker celebrated their sixtieth wedding anniversary before his passing in 2010.

Mrs. Tucker moved to Winter Haven, Florida in 1953 with her husband and twin daughters, Mary and Martha. Their family grew in 1960 with the birth of their son, Terrell R. “Terry” Tucker.

Mrs. Tucker’s employment began as a secretary in the Macon Hospital. In Florida, she worked for Acceptance Loan Corporation, Lake Region Bank, People’s Bank of Auburndale, and, at her retirement, she was serving as a legal secretary for then county solicitor, Gordon MacCalla.

Mrs. Tucker did not let her retirement slow her down. She immediately joined the Bouquet Garden Club of Winter Haven, Florida. She maintained her membership until her passing, serving in a leadership role for both the Bouquet Garden Club and Winter Haven Council, where she became a lifetime member of the National Garden Clubs, Inc., the Florida Federation of Garden Clubs, and the Winter Haven Council. At the state level, Mrs. Tucker was given the distinction of the Hall of Fame, Pillar of Pride, as well as the Deep South Pillar of Pride awards. On the local level she received the Penny Pines Award. For many years she enjoyed serving as the installing officer, as well as ticket chairperson of Bouquet Garden Club’s annual Fashion Show. Her friendship with her sister members was a delight to her!

Mrs. Tucker’s diverse activities were learning to fly the family’s 172 Cessna Skyhawk plane (although she never flew solo); deer hunting in South Carolina; many wonderful times at the beach house on Little Gasparilla Island; as well as traveling with good friends, Micki Reass, and later, Virginia Peavey. Several trips were made to Virginia’s home in Hiawassee, Georgia.

Mrs. Tucker was well known for her fashion sense and her shopping abilities. As such, Mrs. Tucker served on the local boards for both Belk and Macy’s.

Mrs. Tucker, along with her husband and their children, joined Grace Lutheran Church, Winter Haven, in 1956. She was most dedicated as serving as an Elder for thirty years to her families of responsibility. She valued her Christian faith and salvation as most important to her.

She was predeceased by her parents, her husband, and her three sisters: Imogene Hall, Arlene Oxley and Doris Etheridge.

Mrs. Tucker is survived by:

She has numerous nieces, nephews, and many beloved friends who have been like family.

To send flowers to the family or plant a tree in memory of Eugenia Tucker, please visit Tribute Store
Saturday
24
September

Share Your Memory of
Eugenia
Upload Your Memory View All Memories
Be the first to upload a memory!
Share A Memory
Send Flowers